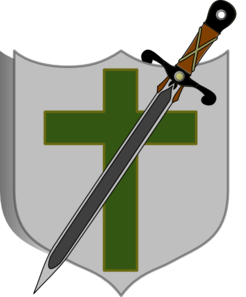 I know a young couple who, a few years ago, lived in a housing co-op, full of duplexes, that was located in a rather pleasant spot on the edge of a mid-sized town.  They have since moved on, but they shared with us how, before they moved, there was a changeover taking place amongst the other residents of the co-op.  A number of new families had moved in and these new residents seemed to be quite unfriendly, even hostile, towards them.  Their children, in similar fashion, treated this couple’s seven-year-old badly out on the playground.  Besides being unfriendly, most of these new residents also seemed to be involved in a kind of New Age type of religion and (apparently) disliked Christians.  Attempts on the part of this young couple to be friendly were met with either no response or glares.  All in all, the situation seemed quite Peretti-esque.  (If you don’t know what I mean by “Peretti-esque” go read the book This Present Darkness by Frank Peretti.  You’ll get the idea and you’ll enjoy it, I guarantee.)  Clearly, this couple had entered into a season of spiritual warfare.

Spiritual warfare takes on many forms.  Sometimes we end up directly confronting the enemy.  Sometimes we cast out demons.  Sometimes the spiritual warrior has to do the Gandalf thing, stand in the middle of a flimsy-looking stone bridge, slam our staff to the ground and shout, “You shall not pass!”  (And…if you don’t get that allusion, you need to read the Lord of the Rings trilogy by J.R.R. Tolkien.  Or at least watch the movies.)  Most of the time, though, it means that we follow Jesus’ admonition to “love your enemies and do good to those who despitefully use you.”  Spiritual warriors need to stand strong before the onslaught of the enemy, but we also, at the same time, need to be watchful for opportunities to show kindness to people who have aligned themselves with the devil.  People will choose to make themselves our enemies simply because they do not know Christ (John 15:18-19).  We Christians don’t follow suit.  We don’t take on an “I’m your enemy” persona.  Instead, we do spiritual warfare by keeping the hand of friendship extended.  We need to keep in mind that those who oppose Christ and hate the gospel message are incredibly thirsty for the life found in Him.  They just don’t know where to look for water.  When we, with unconditional love, dip cups of living water from the river of life itself and then offer it to them, they find their thirst satisfied and their souls transformed (Rev 22:1-2).

So, as I was considering the situation I described above, I was reminded of a scene from Revelation 11:1-14.  The passage describes two “witnesses” who stand in the middle of the city preaching the gospel.  The spirit of antichrist hates them with fierce, passionate hatred and sends soldiers against them, trying to destroy them.  But whenever someone comes against them, fire comes from the mouths of these two guys and burns their enemies to a crisp.  Weird, huh?  That sounds like X-Men stuff, or maybe something the Avengers would do.  (Think Marvel comics, okay?)  Still, that’s the imagery God had John write down and since it’s in the Bible, it is true.  That means we have to take it seriously.  When I was growing up, the church our family was part of taught us that this passage in Revelation 11 described something that was literally going to happen and that there would literally be two, fire-breathing guys standing in the streets of Jerusalem who would miraculously burn their enemies to cinders.  Wow!  What a scene!

I’ve come to see it differently over the years.  I think the biggest factor that changed my thinking about that passage is that it just doesn’t fit with Jesus’ words that we should love our enemies.  Incinerating anyone who opposes you isn’t exactly loving, right?  So, here’s an alternate way to look at it.  (BTW, now would be a good time for you to go and read that passage I noted above.  Here's the reference again:  Revelation 11:1-14.)  Anyone reading the book of Revelation eventually has to sit back and go “Woah!” over the strange and bizarre imagery the Apostle John presents us with.  When I try to interpret it literally I have to contort myself into the strangest of theological shapes and that kind of twisting around in my thinking just doesn’t sit well with me.  Instead, it is better to look at The Book of Revelation through allegorical lenses.  The whole book is full of allegory and symbols that point us to what God wants us to understand.  The two witnesses featured in Chapter 11 are a great example of what I’m saying.  As I look at that passage, I don’t see two literal human beings.  I see in those two witnesses an allegory of the church, the body of Christ, teaching the world about the Lord, winning souls to Jesus.  Our enemy the devil, of course, opposes them/us and seeks to destroy them.  Looked at from that angle this passage presents a picture of the church’s witness, a witness that has been presented to the world for over 2000 years.  The spirit of antichrist has been actively opposing the church for the last two millennia and he hates all things Christian with a vicious, vitriolic hatred.  Over the centuries millions of Christians have died at the hands of people controlled by the spirit of antichrist.  Persecuted Christians are still dying today on a daily basis as Satan’s emissaries hunt them down and kill them.  Yet the church still stands, witnessing for Christ, redeeming souls, one by one, from Satan’s hands.  That’s the picture I see painted in Revelation 11.

But what about the fire that comes from the mouths of the two witnesses, burning their enemies?  Does that mean we should kill anyone who opposes Christianity?  Well, the truth is, we do exactly that.  What?  Hear me out.  Assuming that you, reader, are already a Christian, let me ask you this question:  What happened to you when you received Christ?  Well, the Bible tells us that you died.  Yup.  You died to sin.  The old you got buried and the new you now lives with Christ.  Paul put it this way:

How can we who died to sin still live in it?  Or are you unaware that all of us who were baptized into Christ Jesus were baptized into His death?  Therefore we were buried with Him by baptism into death, in order that, just as Christ was raised from the dead by the glory of the Father, so we too may walk in a new way of life.

When you speak Christ to someone, you are, spiritually speaking, burning them to a crisp, killing the sinful, fallen them with the words that come from your mouth.  Then they are raised up with Jesus and live in new life with Him.  The fire of the gospel message comes from your mouth and kills the sinful them and then they are remade alive and clean in Christ.  Do you see how that fits the imagery of the passage?  We kill people with the fire (the words) of the gospel and Jesus gives them new life.  I really like that concept!

So, how does that all tie into what I told you about that young couple, spiritual warfare, and Peretti-esque situations?  Well, it just means that when we find ourselves in a situation where the enemy is actively attacking us, we simply have to do spiritual warfare.  We and those who are joining with us in the spirit, have the assignment of taking on the enemy and his minions in the spiritual realm.  We get to use the authority Jesus gave us in Luke 10:19 and assault the gates of Hell (Matt 16:18).  We get to pray for the people the enemy is using and watch for God to make opportunities for us to show them kindness.  We get to offer cups of living water to those who have made themselves our enemies.   The fire of the gospel will burn them to a crisp and the life of Christ will raise them up to new life.  Isn’t our God amazing?