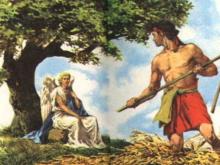 “The people who are with you are too many for Me to give the Midianites into their hands, lest Israel claim glory for itself against Me, saying, ‘My own hand has saved me.’
Judges 7:2

If you attended Sunday School as a child you are most likely familiar with the story of Gideon and how, with just 300 men, he routed and destroyed an army of over 100,000 soldiers.  If you aren’t familiar with the story you can read it in the Bible book of Judges Chapters 6-7.  Through God’s influence Gideon, in just a moment of time, was transformed from an anxious young man who was hiding from the Midianites, into a man of faith on a mission of deliverance.  The writer of the the New Testament book of Hebrews includes him in the “Hall of Faith” where the great believers of history are listed (Heb 11:32).  I’d encourage you stop for a moment and read Judges 6-7 so that you will have a better idea of what I’m talking about in today’s post.

So, here’s a question for you to ponder:  Taking the story of Gideon, what event/aspect of the story was the most significant?  Was it the appearance of the Angel of the Lord when Gideon was hiding in the wine press?  Maybe it was the supernatural burning of Gideon’s offering.  I find the episodes with the fleece as he tried to deal with his own doubts comforting.  I really like the part where the Israeli soldiers break the jars covering their torches, blow their trumpets, and 100,000 enemy soldiers are routed.  That really cool episode gets my adrenaline running when I read it.  However, the most significant part of the story wasn’t in the battle or the victory or the transformation of Gideon.  We see it in God’s words, “The people with you are too many….”  Why?  Why did God deem it necessary to whittle Gideon's army down to almost nothing?  Well, because God always insists that His people (us included) be people of faith.  Our fallen, human natures are fickle.  We can be at the end of our rope, powerless to affect any change in our disastrous circumstances, go to God in prayer and, when we see a miraculous resolution to the situation come about in our favor, we sit back, and claim credit for ourselves.  “See...what I did turned it all around.  I fixed it!”  Far too often, even when we are intentional about giving God the credit, in our hearts we are convinced that we were the ones who turned it all around.  God doesn't appreciate that kind of attitude, so when He does something, He isn’t going to let us attribute it to the hand of man.  That’s why He had Gideon send two thirds of his army home and then, of the 10,000 soldiers who stayed with him – all brave men of courage – He sent home another 97%.  With just 1% of an army that was outnumbered to start with, nobody could ever claim that Gideon’s 300 men brought about that great victory.  Clearly God did it.

that would take power away from politicians who seem determined to run after sin and enact policies/laws that run contrary to the righteousness of God.  While the Republican party is anything but saintly they are far, far closer to doing things God’s way than the Democrats.  So, we’ve been hoping for a “red tide” and instead we got, at best, a “red ripple”.  We were so sure that this election would turn things around – why didn’t it happen?  Why didn’t God answer our prayers?  Well, because if the election had gone our way we would all “claim glory…...saying, ‘My own hand has saved me.’ ”  We were trusting in our own political power instead of God.  So He didn’t give us a “red tide”.  God is looking for real, true faith and when He sees it, He will act on our prayers for America.

So, will God save and transform America?  If He does, it will be in response to a people of faith who are willing to submit to whatever He decides.  Maybe, instead of giving us a transformed nation, the time of His return is approaching and His solution to our issues with sinful politicians and oppressive governments will be to bring it all to an end.  Personally, I think that would be awesome!  As I look at Bible prophecy I see both scenarios, either His personal return or the transformation of the hearts of the American people, as possible.  My choice is to sit back and relax in the knowledge that He is sovereign over my life and my nation.  I will continue to pray that wicked leaders will be cast down and that He will raise up righteous men who will govern according to His ways.  I’m not going to give up.  I’m going to trust.